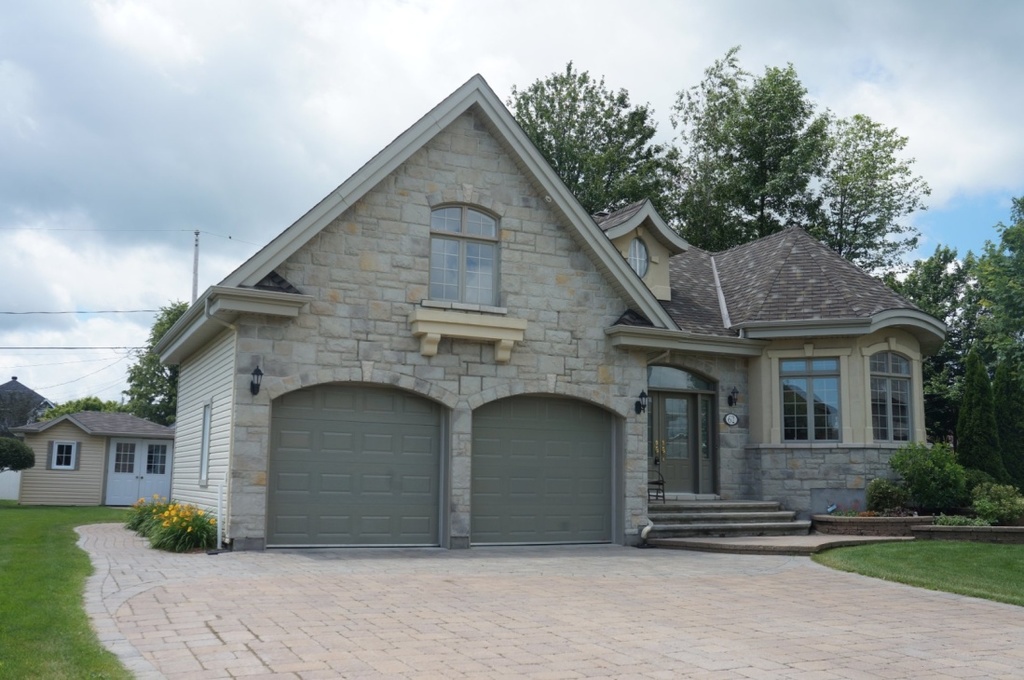 We live in on a quiet, Quebec village with a long and interesting history. From Coteau-du-Lac we have easy and direct access to virtually all of Central and Eastern Ontario as well as Western Quebec and New England. The town sits astride the Trans-Canada highway, not far from the East-West rail-line connecting Canada’s two largest cities and the mighty St. Lawrence River/Seaway. Less than 20 minutes away lies the West Island of the city of Montreal, one of the largest French-speaking cities in the world.

Our home mirrors its milieu. It offers all modern amenities and conveniences but is designed for the quiet enjoyment of our various interests and pastimes.

Day-to-day life centers on the kitchen and adjoining dining area which opens onto a sunny terrace with a large propane BBQ and outdoor dining area. In our family room, a giant flat-screen TV and home theatre system offers HD and 4K programming in both French and English on several hundred Canadian, US and international channels.

Internet streaming services (Netflix, HBO, Crave TV, and The Movie Network) and a library of almost 1,000 DVDs (many with French and Spanish soundtracks) add to our entertainment options.

Technically, the house has 4 bedrooms but Mary-Anne uses one as her embroidery studio. Both the master and guest bedroom have queen-sized beds and their own full bathroom on separate floors. There is also a "captain's bed" in a second guest room which can sleep two people when necessary.

Our exchange partners have access to two vehicles, a beautifully-maintained Mercedes-Benz cabriolet and a late-model Nissan Murano SUV with all-wheel drive. Both are air-conditioned and fully-equipped for touring.

When we can tear ourselves away from the comforts of home, there are virtually endless attractions on all four points of the compass.

Less than 30 minutes from our front door, we can explore the City of Montreal with its many cultural and entertainment attractions, outstanding shopping and scenic waterfront.

An easy drive west takes us to the Thousand Islands region where we can cruise the St. Lawrence on any of a dozen different tour boats; step back in time at Upper Canada Village (a heritage park depicting 19th-century pioneer life), and visit fairy-tale Boldt Castle on the Canada'US Border. After a relaxing drink at one of the local spas, we can drive on to historic Kingston, the site of Fort Henry and its re-enactments of colonial garrison life.

An hour to the north takes us to Ottawa -- with its galleries, museums; Gatineau National Park and the World Heritage Rideau Canal system. As Canada's capital city it offers a variety of cultural and entertainment choices in both French and English.

Head south for the US border crossings a few kilometers away and discover Lake Placid and the Adirondack Mountains of upstate New York.

And finally, we can't overlook the beautiful city of Quebec... the beating heart of French Canada and a World Heritage site in its own right. Surrounded by fine restaurants and fascinating boutiques, "the Citadel" and Quebec's iconic Chateau Frontenac will take your breath away.

All this, however, gives only a taste of our region's beauty and diversity.

Unless you love winter sports, Southern Quebec is probably not the best place to vacation from December to April, but from the middle of May until the end of October the weather is ideal for touring. Personally, our favorite season is early autumn and we've learned that it's absolutely the perfect time for a visit here. The autumn foliage is spectacular and harvest time brings an incredible range of delicacies to our local restaurant scene.

We are also close to one of North America's major flyways for migratory bird species, and the bird-watching can be fascinating. Watching the great skeins of Canada geese flying south in classic V- formation is a haunting and unforgettable experience. It’s also the time when ‘sugaring off’ takes place for local Maple syrup producers and many offer tours of their Maple "bush".

Our favorite exchange destinations include France, Italy, Greece, Belgium, and Great Britain but we are open to any and all possibilities. Wise travelers often choose Eastern Ontario to learn more about Canada's diverse people and founding cultures. After living in 6 countries and twice as many towns and cities over the course of our careers, that's exactly what we did!

Because we're quite new to this area we still learning about its history. We do know that until quite recently it was a resort area for people who lived in Montreal. As the city of Montreal has grown, its boundaries have pushed out so far that now Coteau-du-Lac attracts city workers who don't mind the 30-minute commute to the "West Island".

What attracted us to the village is its tranquility and village atmosphere. Even so, we love its proximity to the city. We can be in Montreal, with its restaurants, entertainment and excellent shopping in less than 20 minutes. Montreal itself is a great city, with all the choices and options you would expect. It is the largest French-speaking city outside France and there is a Gallic charm to the city's streets that informs ever aspect of the Quebecois culture. Even if one doesn't speak a word of French, however, most of our fellow Quebecois are fluently bilingual.

Our immediate neighborhood is an enclave of modern, well-designed houses with easy access to a variety of services. A 50-km bicycle path, for example, is literally minutes from our front door. It runs alongside a 19th century canal that has long since been disused. A few hundred meters in the other direction is the great St. Lawrence River and Seaway. The village's commercial centre includes an excellent supermarket, an artisanal bakery,, dry cleaners and several small restaurants. More shopping options are a few minutes away in the Seaway town of Salaberry-de-Valleyfield.

As a vacation destination, we believe that our location offers countless opportunities for the exploration of St. Lawrence Valley. The Adirondack Region and Western Quebec. We would be delighted to answer any and all questions.

Since we are both retired, our travel plans aren't quite as ambitious as they once were. We much prefer the calm of the countryside to the hustle of big cities. We are fascinated by history, so we tend to spend a lot of our time wandering around museums, old forts, medieval European castles and old battlefields.

Mary-Anne is a needlewoman of great skill and embroiders in a wide range of techniques for which she has won many prizes and awards. She is also a great reader and world-class procrastinator.

My hobbies aren't quite as exciting. I build and paint military miniatures, armored vehicles, and dioramas; play guitar and have been known to sing when absolutely certain no-one can hear me. For many years I was active in community theater and performed improv comedy.

We both love books. movies and music and have large collections of DVDs, books and music in a variety of media; enjoy TV dramas and subscribe to a number of satellite and Internet streaming services (HBO, Crave, the Movie Network, YouTube,. and Facebook for example).

Needless to say, we both love to travel -- especially to France. Since our first exchange in Barcelona 35 years ago, we have made 23 exchanges in Europe alone. We let our membership lapse for a while so that we could spend more time at our condo in Sarasota, Florida but found we were hooked on home exchange.

Photography is a hobby we both share... along with cooking... and home improvement. Many of the photos on our listing were taken on home exchanges through Intervac and other home exchange groups.